THE BERGMAN ESTATE IS CLOSED THROUGHOUT 2020

The Bergman Estate on Fårö Foundation regrets to inform that there will be no regular call for applications for 2021. Instead, applicants who were accepted before the cancelled 2020 season, will be offered a stay (as far as travel restrictions and other corona virus related measures allow).

The next regular call is scheduled for October 1st 2021. 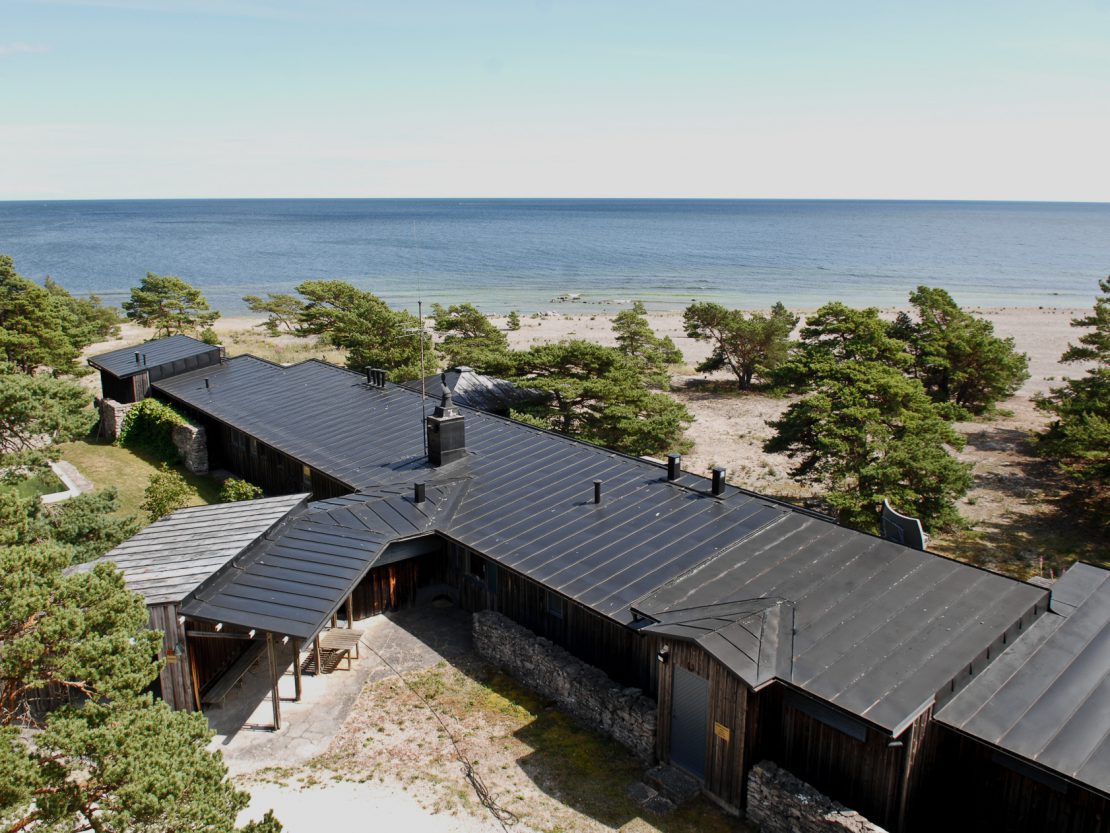 A place of work, inspiration and contemplation
"The Bergman Estate on Fårö is a place for artists, scholars, and journalists needing somewhere to work."
From Linn Ullmann's initial project outline

Ingmar Bergman lived and worked on the island of Fårö for over 40 years. Following his death, the director imagined his home continuing to be a meeting place for people who work with music, film, photography, theater, and literature.

The Bergman Estate on Fårö invites artists as well as scholars, non-fiction writers, and journalists from all over the world to come and work at Ingmar Bergman’s estate.

His houses have been preserved in their original state down to the notes on Ingmar Bergman’s bedside table. The environment aims to nurture contemplative and creative work – in the same way as it inspired Ingmar Bergman’s own artistic pursuits throughout forty years.

The Bergman Estate on Fårö consists of four houses and a cinema. The estate was expanded through the years; Ingmar Bergman viewed it as an extension and expansion of his own artistic pursuits.

The main building is located at Hammars. This house was Ingmar Bergman’s private home and workspace. Hammars is open to residents between nine and five on weekdays. Residents stay in Ängen, Dämba, the Writing Lodge, or in the guest house at Hammars. 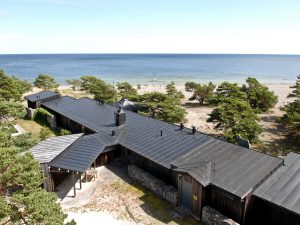 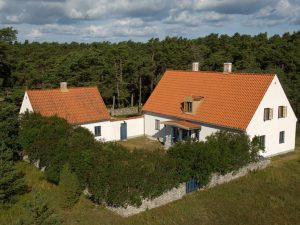 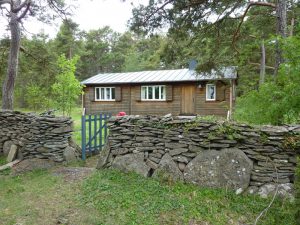 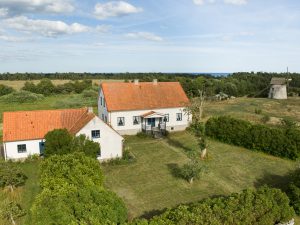 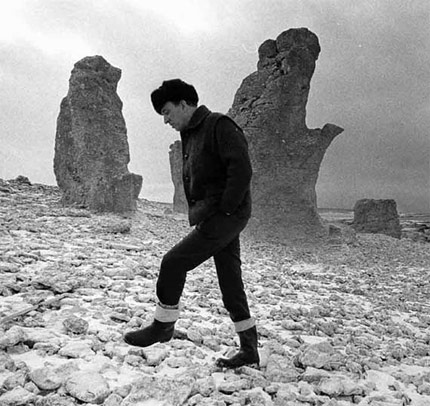 "Ceremoniously speaking, you could say that I had found a home, a true home."
Ingmar Bergman on his first encounter with Fårö in 1960

In 1960, Ingmar Bergman was about to make the movie Through a Glass Darkly, a story about four people living on a remote island. Inspired by a documentary he had watched, Bergman wanted to shoot the film on the Scottish Orkney Islands.

The Swedish film production company SF (Svensk Filmindustri) worried about excessive budgets, but Bergman could not find a setting in Sweden that could offer the atmosphere he had in mind. In a last attempt, before trying to pursuade the production company to use the Orkney Islands, Ingmar Bergman went to Fårö. He arrived on a dark and rainy night in April and immediately felt this was his landscape.

Not only did Bergman shoot Through a Glass Darkly (1960) on Fårö, the rugged and distinctive landscape of the island was to become a hallmark of films such as Persona (1966), Shame (1968), A Passion (1969), and the TV series Scenes from a Marriage (1973). In his documentaries Fårödokument (1969) and Fårödokument 1979, Bergman highlighted the depopulation of Fårö and the drastically changing economic conditions for the island’s remaining population – from agriculture and fishing to tourism in the summertime.

The landscape and the people of Fårö inspired in Bergman a sense of peace, inspiration, and freedom, as well as an urge to create, work, read, and watch films (he watched two films a day in his private cinema in Dämba).

The relationship between Ingmar Bergman and the locals of Fårö was one of mutual love and respect. The director helped in various ways to preserving Fårö as a vital community, and the residents of the island made sure that he was left alone from prying tourists. For construction, refurbishing, and maintenance, Ingmar Bergman always used local experts and craftsmen, a tradition that will now be continued by the Bergman Estate on Fårö Foundation and the new owner of the property, Hans Gude Gudesen.

"Ceremoniously speaking, you could say that I had found a home, a true home."
Ingmar Bergman on his first encounter with Fårö in 1960

Twice the size of Manhattan (114 km2), Fårö is located northeast of Gotland. The barren and distinctive landscape alternates between dwarfed pine trees and open plains, wetlands, small lakes, and cultivated fields. Several kilometres of sandy beaches can be found at the northern end of the island, while the northwest is home to two nature reserves – Langhammars and Digerhuvud. Fårö has approximately 500 permanent residents, but in the summertime tens of thousands of visitors come to the island.

"I cannot imagine my life and how it would have turned out had I not had Fårö."
Ingmar Bergman in an interview 2003

When Ingmar Bergman died at his home on Fårö in 2007, part of his estate included four island properties. According to his will, these were to be sold on the open market, and the proceeds divided among his nine heirs. The question of how the properties were to be administered as the cultural legacy of one of the greatest directors in the history of cinema sparked off a debate that reached far beyond Sweden’s borders.

Bergman had often expressed the wish that these buildings continue to be meeting places for people working within various types of artistic fields, also after his death. His youngest daughter, the author Linn Ullmann, lived on Fårö during her father’s illness in spring of 2007. Together with her family, she moved into the house at Ängen in September of the following year, working and looking after the properties.

It was during these long and dark winter evenings on Fårö that Ullman and her writer colleague Brit Bildøen developed a plan for the possible future use of the houses – a plan that would be in keeping with the spirit of Ingmar Bergman and help to maintain Fårö as a vibrant community. The Bergman Estate was to be anything but a museum. Artists and scholars of every kind and from all over the world would come here to work, while the houses would provide an arena for public cultural events, many of them with a special view to the children and young people of Fårö and Gotland.

A busy period followed, dedicated to the effort of finding someone willing to buy the properties and realise the vision of The Bergman Estate. Time had nearly run out, when Norwegian archaeologist and inventor Hans Gude Gudesen became aware of Linn Ullmann’s plans for the properties and contacted her. In autumn of 2009, Gudesen bought back nearly all of the personal effects that had been auctioned off at Bukowskis in Stockholm, and soon after his bid for Bergman’s houses on Fårö was accepted.

Under the leadership of Linn Ullmann and Brit Bildøen, and in cooperation with a dedicated and enthusiastic Board of Directors, began the important and time-consuming work of developing and formalising what was to become The Ingmar Bergman Estate on Fårö Foundation. Kerstin Brunnberg, a Swedish journalist with extensive experience in the cultural field, was an important early supporter of this effort. Her active involvement with the Board, first as Vice-Chairperson and subsequently as Chair of the Foundation, has been decisive for the project’s progress.

In May 2010, Bergman’s furnishings and personal belongings were returned to the properties, which had been carefully and tastefully renovated by the owner. Only a few days later, The Bergman Estate on Fårö welcomed its first guests.

For more information about the Bergman Estate, read the initial project outline written by Linn Ullman.

"I cannot imagine my life and how it would have turned out had I not had Fårö."
Ingmar Bergman in an interview 2003

1960 In April, Ingmar Bergman visits Fårö for the first time, about to shoot the film Through a Glass Darkly. It is love at first sight.

1965 Ingmar Bergman decides to move to Fårö. He still keeps an apartment in Stockholm.

1967 On Midsummer’s Eve, the house of Hammars is ready to take in Bergman and Liv Ullman along with their daughter Linn.

2003 Ingmar Bergman decides to leave the theater, sell the apartment in Stockholm and move to Fårö permanently.

2007 Ingmar Bergman passes away in his house at Hammars. Before his passing, Bergman picks the location of his grave and gives directions for the funeral. No other flowers than red roses are allowed.

2009 According to his will, all objects that belong to Ingmar Bergman are auctioned off at Bukowskis. Hans Gude Gudesen purchases almost every single item. Shortly thereafter, Gudesen’s offer for the houses is accepted.

2010 In May, all furniture and items return to Fårö. The Bergman Estate on Fårö recieves the first guests a few days later.